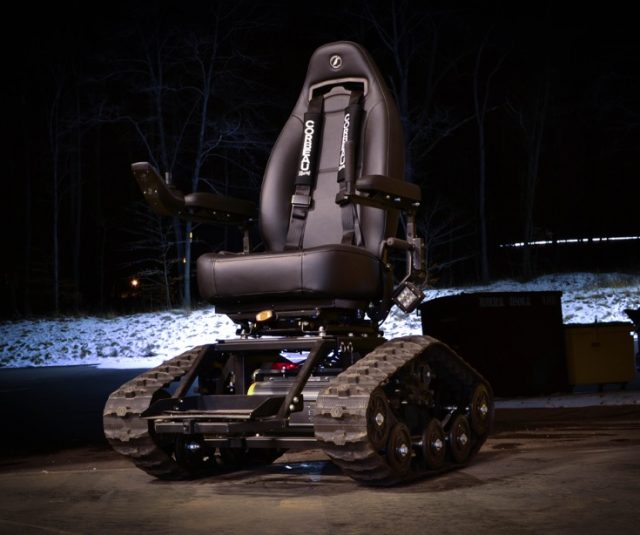 While making inspection robots for a Cranberry company, David L. Kennedy II and his cousin, Ben Ridenbaugh, took on a side project to help Mr. Kennedy’s grandmother.

Marian Kennedy was using a wheelchair and living in a rural area near New Wilmington, Lawrence County. She could not even get her mail.

So Mr. Kennedy had the idea of attaching tracks — so-called caterpillar treads — to a battery-powered wheelchair so she could travel across grass or places lacking concrete and get her mail, roam her yard and enjoy the outdoors.

It was not easy or cheap, but that project led Mr. Kennedy, 35, of Volant, Lawrence County, and Mr. Ridenbaugh, 27, of Slippery Rock, Butler County, to create Trac Fabrication, Inc. in 2013. The company now has 10 employees at manufacturing sites in Grove City and Slippery Rock. 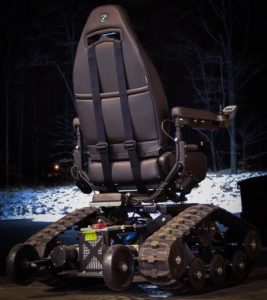 Its outdoor wheelchairs are futuristic-looking machines that allow users to hunt, fish and even farm. Equipped with a snowplow or pulling a mower, they also provide people with disabilities the ability to do chores and help neighbors.

Earlier this month, Trac Fabrication, Inc. received a utility patent on three aspects of its design, expected to further advance the privately held company that sells up to 200 wheelchairs per year, mostly in the United States. It also ships chairs overseas, including several to New Zealand.

The cost ranges from $12,000 for a basic 36-inch model to $20,000 for customized wheelchairs that include a new line of 17.5-horsepower gasoline-fueled wheelchairs with roll bars. The company also makes models only 30 inches wide that can be used indoors.

Wheelchair designer Rory Cooper, a University of Pittsburgh professor and founding director of the Department of Veterans Affairs’ Human Engineering Research Laboratories, test-drove a Trac Fabrication, Inc. wheelchair. While there are other companies manufacturing similar wheelchairs, this one “fills a niche for people with disabilities by providing access to the outdoors,” he said, noting that some parks and outdoor recreation facilities will loan them to wheelchair users.

“My experience is that they work well and can be fun. I have friends that use them to hunt and fish.” 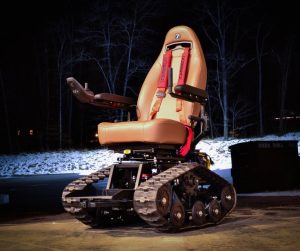 The company followed a fairly straight track to success. Mr. Kennedy and Mr. Ridenbaugh worked for Visual Inspections, LLC in Cranberry, which makes remote-controlled robots used to inspect equipment and systems, Mr. Kennedy’s grandmother, whose rheumatoid arthritis was disabling, used the original battery-powered wheelchair with treads for several years. When she could no longer use it, she advised her grandson to sell it to someone who would benefit from it. Mrs. Kennedy died in May 2017.

When Mr. Kennedy advertised the device on eBay, the auction drew up to 100 interested bidders. A California man ultimately bought it for $7,000 for his brother who had disabilities. Mr. Kennedy also received requests from 10 others about building such a wheelchair for them.

Realizing the demand, and given their skills in making mobile robotic equipment, the two formed the business and filed for patents in 2014.

Each wheelchair is customized — “like a snowflake or fingerprint” — and can be operated in multiple ways, including puffs of air. What initially took 30 days to build now requires only four hours, Mr. Kennedy said.

Mr. Cooper said there are some limitations to such wheelchairs, including difficulties in transferring the user from a standard wheelchair into the outdoor model. It is also obvious that they cannot maneuver over certain natural barriers and rougher terrain.

The biggest barrier is that “they are not covered by health insurance. However, there are charities like Rotary International who provide them to some people,” Mr. Cooper said. 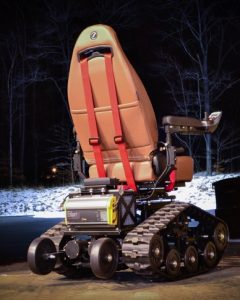 Mr. Kennedy agreed that “the biggest struggle” is affordability. For that reason, the company is working with groups including the Rotary on fundraising efforts to provide people with outdoor wheelchairs.

“Someone in the peak of physical fitness who is injured now feels like a burden,” Mr. Kennedy said.

But that changes when a person can fish, hunt or mow three acres. Daniel Christiana, 26, of Slippery Rock, was nearly pro-level in motocross when he crashed, leaving him with quadriplegia. He now serves as a Trac Fabrication, Inc. dealer and promoter of their use, all while raising money through his GoFundMe Wheels for the Woods site to have the company transform one of his traditional wheelchairs into one with tracks.

“I’m starting a nonprofit to help people who have no means to buy one and gift it to them,” he said.

Mr. Kennedy said it is unfortunate that his company’s market “is never going away, given birth defects, injuries and age.”

“I wish that we didn’t have to, but we are able to help people who need it,” he said. And as it turns out, “we are helping people all over the world.”